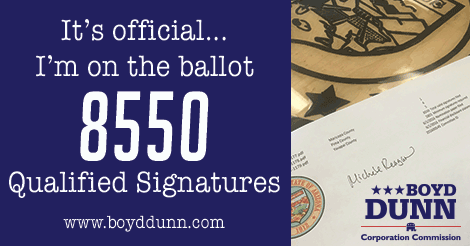 “I want to thank the thousands of people who signed my petitions and who support my efforts to bring stability to an important institution,” Dunn said. “The Corporation Commission does important work to ensure our electric and water grids provide all Arizonans with water and power in an efficient manner.”

Dunn is a retired Superior Court Judge and brings more than 37 years of legal experience to the race. Dunn served as an assistant Attorney General and mayor of the 4th largest city in Arizona.

“The Corporation Commission needs a steady hand and I will bring to the commission my years of experience on the bench settling cases and making tough choices,” Dunn said.

Prior to being appointed to the bench, Dunn served as mayor and council member in Chandler. Many of the policies Dunn enacted helped usher in an era of prosperity for the city. During Dunn’s leadership, Chandler grew from 90,000 people to more than 240,000. While serving as Mayor, Chandler added $5 billion in private investment and over 16,000 new jobs. Under Dunn’s leadership, Chandler received an “All-American City” award by the National Civic League.

As Mayor, Dunn also saw first hand the role public utilities play in the success of our business environment. During his tenure at the City of Chandler, Dunn oversaw the city water and wastewater department and presided over public rate case hearings. During this time Chandler maintained some of the lowest rates in the Valley.